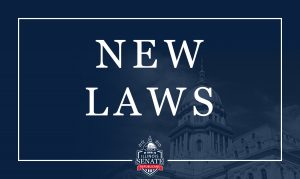 SPRINGFIELD – With the New Year comes a host of new laws that affect many aspects of Illinoisans’ lives, according to State Sen. Dave Syverson (R-Rockford).

Syverson says these new laws cover a wide variety of subject areas. Some of the more notable laws that residents should be aware of taking effect on Jan. 1, 2022, include:

This year, the Legislature passed comprehensive changes to the state’s FOID system. Proponents call the reforms important public-safety improvements, while opponents, including most Senate Republicans, felt it was yet another attack on law-abiding gun owners and a gateway to mandating fingerprints. As signed into law, the new FOID law:

In the middle of the night during a January 2021 lame-duck session of the General Assembly, Democrats pushed through a 764-page criminal justice reform bill that makes major changes to how law enforcement officers do their jobs. Provisions of the bill, which include several elements opposed by law enforcement and victims’ advocacy groups, take effect at different times.

One provision of the law taking effect at the beginning of the New Year includes the start of the phase-in requirement that all law enforcement officers in the state wear body cameras by 2025. Counties and cities with populations of 500,000 or more (City of Chicago; Cook, DuPage, Kane, Lake, and Will counties) will have to meet this requirement by Jan. 1, 2022, and then smaller departments will be phased in over the next few years.

Provisions of the bill with later effective dates include:

To close a loophole some predators were using to reach targeted victims, the Legislature has taken steps to strengthen the Stalking/No-Contact Order Act. As of Jan. 1, a person who is prohibited through a no-contact order from contacting another individual by phone or in person can also be restrained from sending email, texts, or social media posts.

Beginning Jan. 1, all of Illinois’ public universities and community colleges must offer a “test-optional” policy as part of its undergraduate admissions process. This means that students can choose whether or not they will submit SAT, ACT or other test scores as part of their applications for college. The law only affects admissions processes for the state’s public institutions of higher learning.

Agricultural Sciences as an official class to meet state requirements

Outlining the costs of college

Through a new comprehensive report that must now be completed by all public universities in Illinois, when a student declares or changes a major of study, the public university the student attends must provide that student with a report that includes the following:

As of Jan. 1, the State of Illinois will be offering free Gold Star license plates for a surviving widow, widower, or parent of a person who served in the U.S. Armed Forces and lost his or her life while in wartime service. Previously, a $151 registration fee was charged for these specialty plates.

State flags for next of kin

In an effort to show appreciation of the life and service of Illinoisans who answered the call to serve in the Armed Forces, upon the death of an Illinois serviceman/woman, a member of the Illinois National Guard will present a State of Illinois flag to the next of kin.

Beginning in January, those who struggle to afford their prescription medications can take advantage of a new program that makes their medicines more affordable. Through the new Illinois Drug Reuse Opportunity Program Act, individuals may now donate their unused prescription medications back to participating pharmacies, which could then repackage them and make them available to patients in need. Pharmacies may charge a nominal handling fee.

When a family member passes away, survivors should not be saddled with cancellation fees for the lost loved one’s utilities. As of Jan. 1, providers of telephone, cellular phone, television, Internet, energy, medical alert system, and water services are prohibited from charging a fee for termination or early cancellation of a service contract.

Let the kids be kids

While many felt it should not have required legislative intervention, members of the General Assembly passed a law this year that prohibits the Illinois Department of Public Health and local health departments from regulating lemonade or nonalcoholic drink stands operated by kids younger than the age of 16. The need for the law stemmed from an instance where a lemonade stand was shut down because the child had not obtained the required permit for the stand.

And don’t forget about the controversial bills that will also take effect in 2022:

Significant changes made to sex education in schools

This year, the Legislature passed a controversial bill limiting local control over sex education by implementing sweeping new state standards. The bill, passed by Democrats and signed into law by Gov. JB Pritzker, requires public schools that teach sex education to align their sex-education courses with the so-called National Sex Education Standards – standards formulated by out-of-state advocacy groups. These standards are now a baseline for sex education throughout the state. Sex-education courses must also provide information about local sources for additional information and confidential services related to reproductive health. The revamped sex-education classes may be taught from kindergarten through 12th grade.

No later than Aug. 1, 2022, the State Board of Education must develop and provide resource materials that can be used in the new sex-education classes. Schools may choose their own curriculum as long as it aligns with the standards outlined above.

Discrimination in the workforce allowed through carve-out in HCRCA

Despite unprecedented opposition from everyday Illinoisans who urged the General Assembly not to make exceptions within the Health Care Right of Conscience Act (HCRCA), starting June 1, 2022, Illinoisans will see a diminishment of protections against health-related discrimination in the workplace.

The HCRCA, originally enacted with bipartisan majorities, provides vital protections to Illinoisans and prohibits any form of discrimination against individuals who refuse to take part in any medical services or procedures that are contrary to their religious beliefs, morals, or convictions. A partisan carve-out was passed in the General Assembly by Democrats this year which now means these protections do not apply to COVID-19 vaccines or testing. Through the new law, people now can be discriminated against, punished, and even lose their jobs if they do not agree to mandatory vaccinations, even if individuals agree to regular testing.