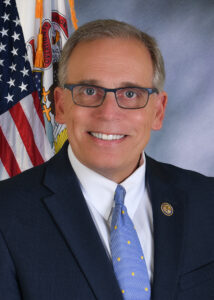 Since joining the Senate in 1993, Dave Syverson has been a reformer, pushing to fix Illinois’ broken ways. Every day, Dave puts his values to work as he represents the people of Northern Illinois.

Born in Chicago, Dave was raised and educated in Rockford. Dave and his wife Lori have four children and two grandchildren. Dave comes from a financial background and is currently working with Williams Manny in Rockford. In addition, he is a partner in a number of other business interests. Dave is also involved in many local charitable causes; one near and dear to him is the building of playgrounds in under-served areas and at local schools.

Dave has been widely recognized for his common-sense approach to improving Illinois’ jobs climate. He created the Illinois Manufacturing caucus with the goal of bringing more focus on the importance of the manufacturing industry in Illinois.

During the 102nd General Assembly, Dave served as Republican Caucus Whip in the Senate as well as the Republican Spokesman for the Senate Health, Healthcare Access and Availability, and Insurance Committees and is a member on the Senate Behavioral and Mental Health, Executive, and Tourism and Hospitality Committees. His Senate Committees for the 103rd General Assembly will be announced soon. In addition, he serves as Co-Chair of the bipartisan Hospital Transformation Committee and the Medicaid Reform Committee. Dave is also a member of the Government Forecasting and Accountability Commission.