SPRINGFIELD – Oral arguments in the McConchie v. Illinois State Board of Elections federal court case concluded during the week, and a court ruling on whether the Democrats’ legislative maps violated the U.S. Constitution is expected before Christmas, according to State Sen. Dave Syverson (R-Rockford).

Also during the week, a new study reveals that Illinois was one of the states hit hardest by identity theft and fraud throughout the pandemic.

In other news, the Illinois Rental Payment Program application portal is now open for renters and landlords, and a new assistance program will help low-income families pay for water and sewer services. 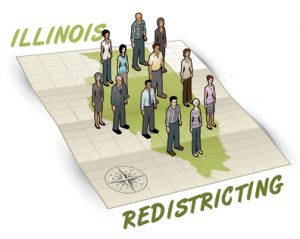 Oral arguments concluded Dec. 7 in the federal court case to determine the legality of the politically-drawn legislative maps passed by Illinois Democrats and signed by Gov. JB Pritzker. The federal panel of three judges is expected to hand down a decision before Christmas on whether Democrats violated the U.S. Constitution and the federal Voting Rights Act of 1965 by underrepresenting minority groups for partisan gain.

In an effort to protect Illinois voters against political gerrymandering, Senate Republican Leader Dan McConchie, House Republican Leader Jim Durkin, the Mexican American Legal Defense and Educational Fund (MALDEF) and the East Saint Louis Chapter of the NAACP have argued that the maps signed by Gov. Pritzker in September underrepresent minority groups and only seek to retain Democrat power in the Illinois General Assembly.

A little over a month ago, the three-judge panel ruled that the initial map drawn by Democrats and signed by Gov. Pritzker was unconstitutional as it violated the Equal Protection Clause of the Fourteenth Amendment to the United States Constitution.

The panel then asked the plaintiffs to file their proposed remedy with the court. Illinois Republicans filed remedial maps that would fix the flaws in the Democrats’ politically-drawn maps by creating more districts with minority voting-age populations above 50 percent. Illinois Republicans argue that their maps would better provide voters the ability to elect candidates of their choice.

Syverson says he is hopeful that the court will accept the Republicans’ maps and find the Democrats’ second round of maps are also unconstitutional. The 35th District Senator says Illinoisans deserve a government that works for the people, not for incumbent politicians and their interests, and that the Republicans’ maps would bring better representation for the people of the state.

According to a recent study, Illinois experienced more identity theft per capita than any other state in the nation during 2021. Overall, Illinois was ranked the sixth most vulnerable state to identity theft and fraud.

The study compared states across 14 metrics, which included average loss amounts, fraud arrest rates and data disposal laws. It also found that Illinois had the nation’s worst identity-theft passport program. This is a program intended to help victims of identity theft regain control of their identities and help them avoid mistaken arrest as well as dispute fraudulent credit charges.

Since the beginning of the COVID-19 pandemic, Illinois has experienced unprecedented issues related to its unemployment system, including the botched attempt to update the Illinois Department of Employment Security’s (IDES) outdated computer system that exposed the Social Security numbers and personal information of nearly 32,500 claimants.

While IDES has not yet released full figures on the impact of unemployment fraud since the beginning of the pandemic, an audit of just the first seven weeks of the federal government’s unemployment pandemic-related programs revealed that IDES gave more than $155 million to fraudulent claims.

The Illinois Housing Development Authority officially reopened its application portal for its Illinois Rental Payment Program on Dec. 6. Both renters and landlords are eligible to apply for up to $25,000 in rental assistance through the program. Applications will be accepted through 11:59 p.m. on Jan. 9 at illinoishousinghelp.org.

Those needing assistance with their applications can contact an Illinois Department of Human Services’ Service Provider Agency. A list of Provider Agencies can be found at https://www.illinoisrentalassistance.org/.

On Dec. 7, the state of Illinois launched the Low-Income Household Water Assistance Program (LIHWAP) with $42 million available to help residents unable to pay their water and sewer bills. To be eligible, Illinois families must demonstrate that they are within 200 percent of the federal poverty line.

Eligible applicants can visit the Illinois Department of Commerce and Economic Opportunity’s website helpillinoisfamilies.com for more information about how to apply for water assistance and other programs.